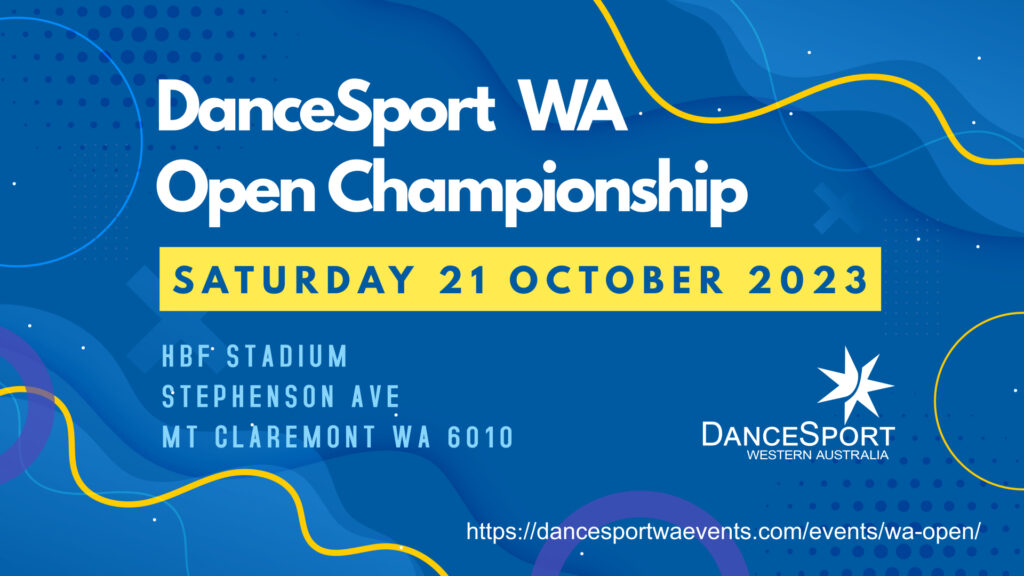 Includes High Tea, Tables available all Day and Evening.
Contact for Tables: Daele Fraser on 0412 954 659
(calls after 11am please) 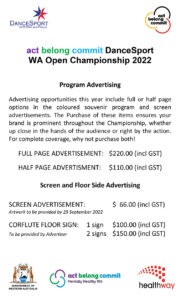 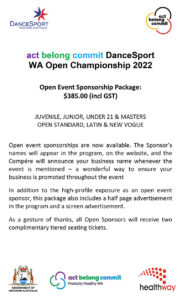 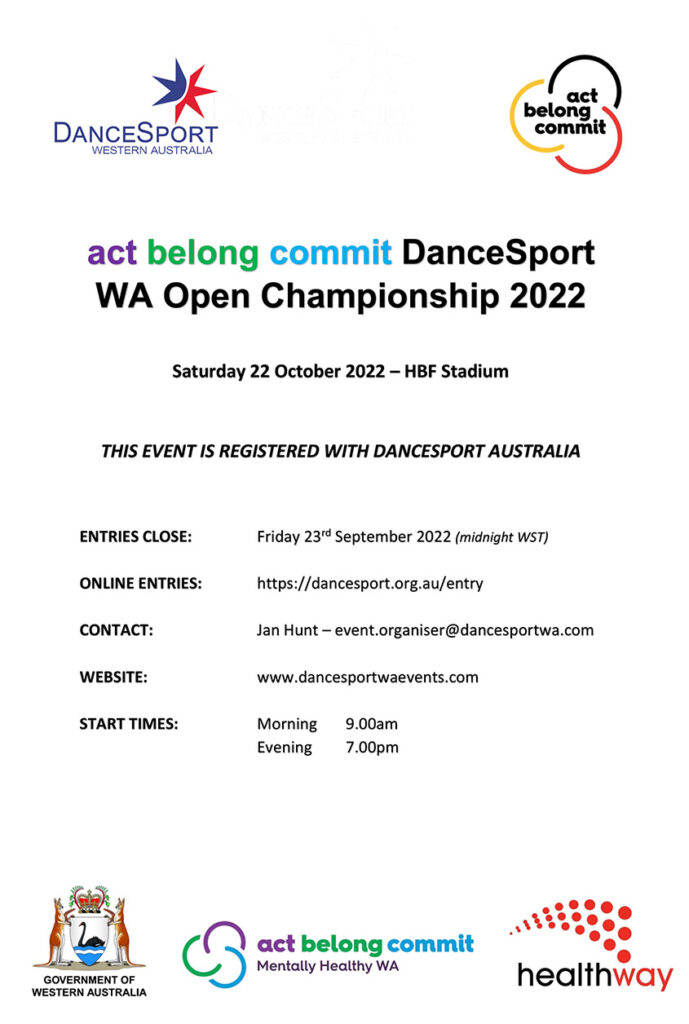 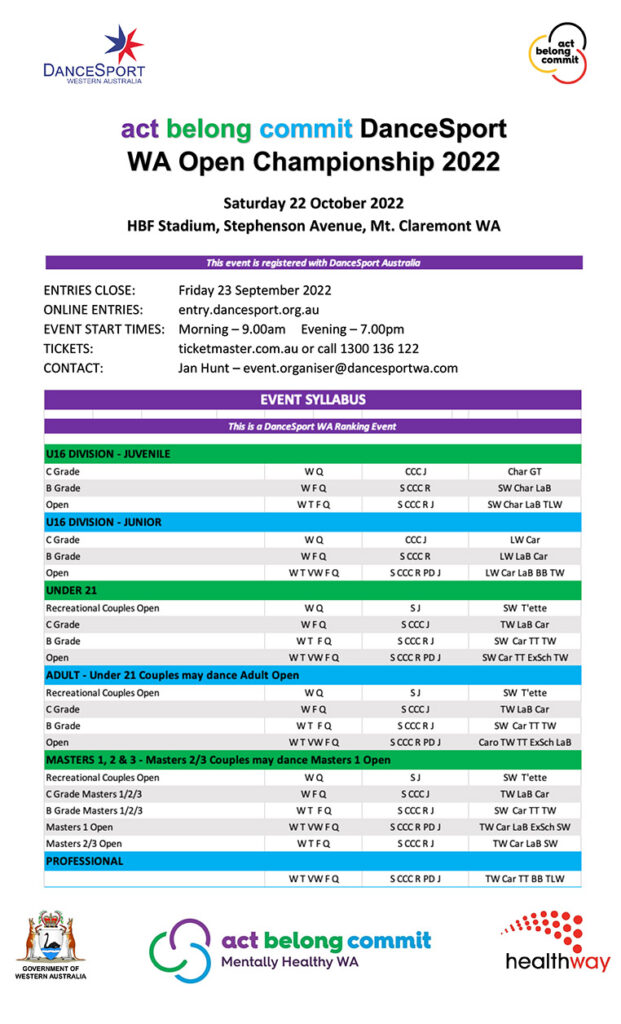 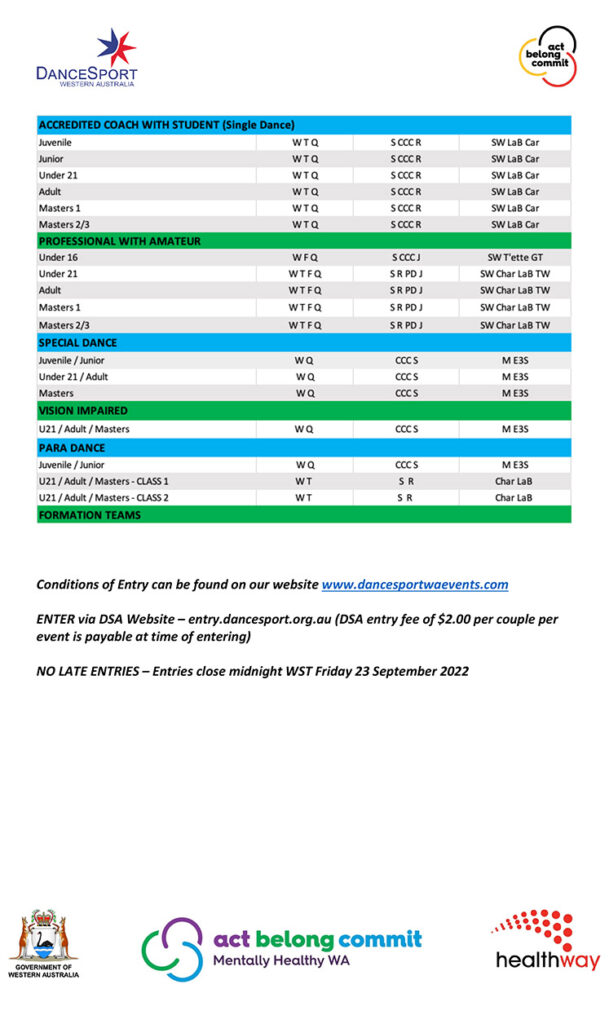 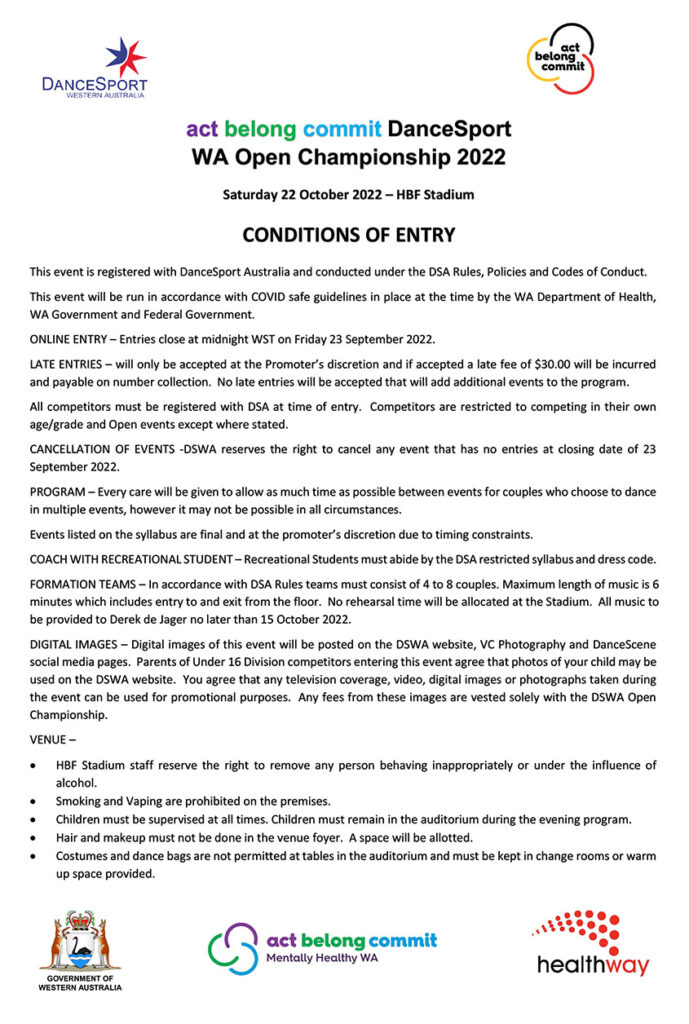 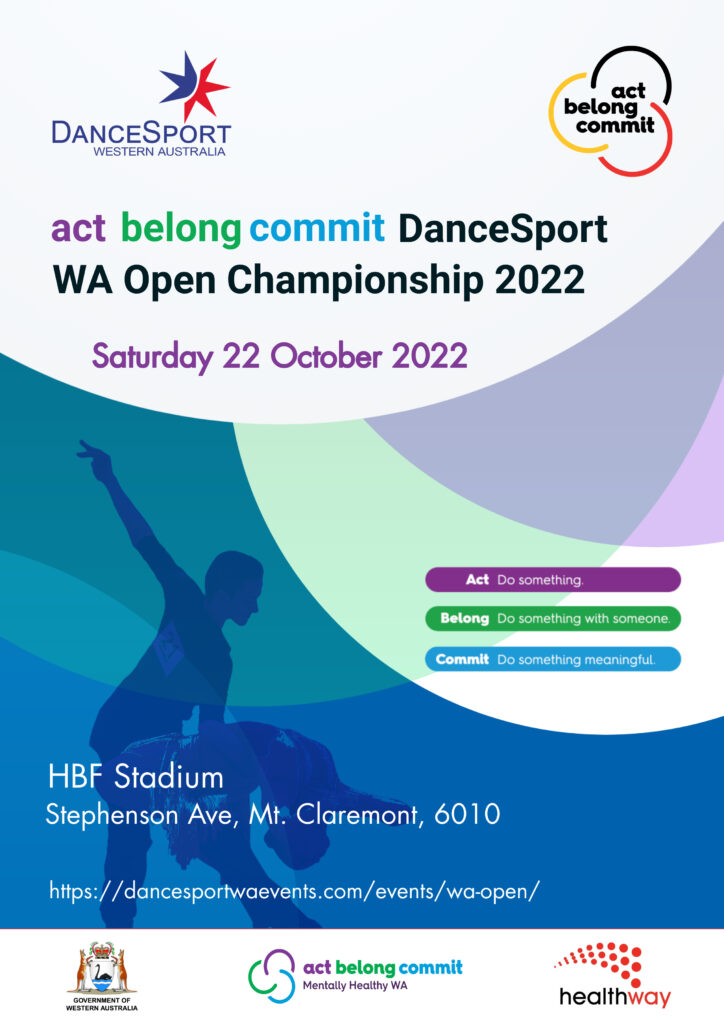 save the date for The WA State Open is DanceSport’s premier annual event where we showcase our best dancers. Couples compete for the State Titles of their Divisions in DanceSport. This event has become one of our most celebrated events as it’s the one where every dancer young or senior, Amateur competitors, or Recreational, and Para Dance and All Abilities make sure they dance their very best.

To experience this wonderful event come to our next WA Open Championships which will be held on Saturday 22 October 2022.

About the WA Open

DanceSport embraces all ages and abilities with a range of Amateur and Recreational events for competitors from six to over 60 years of age. Dancers compete in all three styles of DanceSport, being Standard, Latin American and New Vogue.

Tickets to the act belong commit DanceSport WA Open Championship will be available shortly  through ticketmaster.com.au or call 1300 136 122.

History of the WA Open

The Championship has been held every year since 1986 when it was first held at the Perth Entertainment Centre.  Over the years the event has been held at the Superdrome and the Rendezvous Hotel, returning to the HBF Stadium in 2015.

It is one of two events in the WA DanceSport calendar which is promoted by the WA Board of DanceSport Australia.

The DanceSport WA Board is committed to working together to ensure the success of the State Championship and for the betterment of the dance community and industry in Western Australia.

PERMITTED:
– Water bottles including disposable, thermos and plastic
– Sewing Kits: Needle, pins, safety pins and any items which are required to repair costumes, however should only be used in changerooms or restrooms
– Aerosols including hair spray, deodorant, spray tan however cannot be used inside the Auditorium, only in the changerooms
– Electronic devices such as phones and tablets
– Cigarettes, lighters, matches and e-cigarettes, however smoking is permitted outside the building only
– Small personal snacks such as fruit, sandwiches, vegetable sticks, dips, muesli bars and lollies
– 600ml or smaller soft drink cans and soft drink bottles and electrolyte drinks such as Gatorade
– Small bottles of perfume and makeup.

NOT PERMITTED:
– Glass Bottles of any kind including containers.
– Dangerous items such as knives including butter knives and cheese knives.
– Outside catering including:  items purchased at McDonalds,       Hungry Jacks any other fast food outlet
– Platters or large eskies of food.
– Professional video cameras and recording equipment .These must be authorised by the Dancesport WA with Accreditation
– Cameras with detachable lenses, selfie sticks and tripods
– Oversized bags are not permitted at floor tables or in grandstand seating eg. sports bags, suitcases, suit/dress bags.  All of these items must be stored in changerooms or back of house.
– Prams and strollers
– Alcoholic beverages

Please note as a condition of entry may be subject to bag check upon entry into the venue. Any patron deemed to be intoxicated, disorderly or engagement in anti-social behaviour will be removed
from the  venue.